Calling all YA & Teen librarians! St. Martin’s Griffin has a new batch of teen fiction – JUST FOR YOU! And don’t forget to join us and @earlyword later today at 5pm EST for Early Word YA Galley Chat, hashtag #ewyagc. PARTY GAMES by R.L. Stine (Fear Street series) The first new Fear Street book […]

We love books (duh). And we love librarians (umm, duh!). So that means we double-love these books by librarians (and you should, too):

FATAL ENQUIRY by Will Thomas
Thomas's Barker & Llewellyn series, set in Victoria’s England, have won him a devoted following and his latest has the duo trying to figure out a reluctant ally's real motives. “Recommended for historical mysteries enthusiasts, Anglophiles, and Sherlockians. Fans of Alex Grecian, Anthony Horowitz, and Charles Todd should take special note.” — Library Journal, starred review

Thomas works as a librarian in Tulsa, Oklahoma.

CRADLE TO GRAVE by Eleanor Kuhns
On sale June 17, 2014
In the “intriguing” (Publishers Weekly) third entry in the late-18th-century historical mystery series, Will Rees is stunned to learn a Shaker friend of his has been accused of kidnapping and murder.

Kuhns is the 2011 winner of the Minotaur Books/Mystery Writers of America First Crime Novel competition. She is currently the Assistant Director at the Goshen Public Library in Orange County, New York.

SWAY by Kat Spears
On sale September 16, 2014
In this hilarious and often poignant debut YA, a young man who avoids emotional connection at all costs, is forced to open his heart when he meets the girl of his dreams in this Cyrano De Bergerac story with a modern twist.

Spears works at the Library of Virginia where she organizes author appearances and other literary events.

MURDER AT THE BRIGHTWELL by Ashley Weaver
On sale October 14, 2014
An exquisite seaside resort, an eccentric group of British aristocrats on holiday, and rich 1930s detail lay the setting for this fantastic Golden Age–style debut mystery by young librarian Weaver. “An elegant Christie-esque 1930s romp that will delight fans of Rhys Bowen's Lady Georgie series with its wit, charm, and strong independent heroine. With its dash of romance, Amory Ames and her rakish husband Milo might just be the new Nick and Nora Charles.” — New York Times bestselling author Deborah Crombie

Weaver is the branch manager at Oberlin, the headquarters branch of the Allen Parish Libraries in Louisiana.

We loooove mysteries (the bloodier the better) and your patrons do, too! Our friend and Library Journal Mover & Shaker Kristi Chadwick recently wrote a mystery preview column for LJ and we're thrilled (pun intended) that it includes so many of our titles:

BOOTY BONES by Carolyn Haines
On sale May 20, 2014
In Haines's 14th charming Sarah Booth Delaney mystery, Sarah and her fiance Graf's island vacation goes disastrously awry when she's asked to solve the murder of a treasure-hunter.

BROADCHURCH by Erin Kelly
On sale September 2, 2014
This brilliant novelization of the hit television show Broadchurch follows Detectives Alec Hardy and Ellie Miller as they search for a young boy's killer in a quiet British seaside town.

CRADLE TO GRAVE by Eleanor Kuhns
On sale June 17, 2014
In the next Will Rees mystery from Minotaur Books/Mystery Writers of America competition winner Kuhns, Rees is stunned to learn a Shaker friend of his has been accused of kidnapping and murder.

FATAL ENQUIRY by Will Thomas
On sale May 13, 2014
Thomas is an Oklahoma librarian whose Barker & Llewellyn series, set in Victoria’s England, have won him a devoted following. His latest has the duo trying to figure out a reluctant ally's real motives.

FIVE by Ursula Archer
On sale December 9, 2014
Two Austrian detectives must investigate a series of murders committed by a killer who tattoos map coordinates on his victims in a twisted geocaching game.

FROZEN DEAD by Bernard Minier
On sale August 12, 2014
A suspenseful and chilling murder mystery set in a high-security asylum for the criminally insane and the snowy mountains of the French Pyrénées.

INVISIBLE CITY by Julia Dahl
On sale May 6, 2014
In Dahl's accomplished debut, young journalist Rebekah Roberts finds herself drawn into her mother's tight-knit world when she's assigned to cover the murder of an Hasidic Jew.

LAND OF SHADOWS by Rachel Howzell Hall
On sale June 10, 2014
Homicide detective Elouise “Lou” Norton tries to connect a teen’s death with her own sister’s disappearance.

MIDNIGHT PLAN OF THE REPO MAN by W. Bruce Cameron
On sale October 28, 2014
A repo man's ordinary life is turned upside down when he starts hearing the voice of a dead realtor in his head.

MURDER AT THE BRIGHTWELL by Ashley Weaver
On sale October 14, 2014
An exquisite seaside resort, an eccentric group of British aristocrats on holiday, and rich 1930s detail lay the setting for this fantastic Golden Age–style debut mystery by young librarian Weaver.

WINK OF AN EYE by Lynn Chandler Willis
On sale November 18, 2014
The first woman to win the Minotaur Books/PWA Best First Private Eye Novel Competition in over 10 years, Willis's debut features PI Gypsy Moran who gets roped into a case of murder and police corruption in Texas.

Some titles are available on Edelweiss now—get whitelisted and start reading! 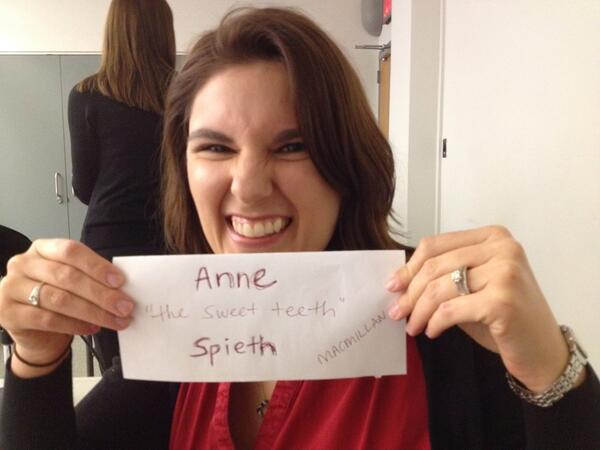 It might be a week before Valentine's Day, but we're already feeling the love!

This morning Anne "the Sweet Teeth" Spieth presented all the latest and greatest titles at the New York Public Library Romance Book Buzz. She also brought homemade chocolate chip cookies in lieu of books saying, "My mom always told me the fastest way to someone's heart is through their stomach."

While sadly we can't share any of her cookies with you, we CAN share our love of great romance titles (har har!): everything from contemporary/paranormal/historical romance to sizzling hot erotica, New Adult, and books OK for YA!

Take a look at the full Edelweiss collection, which has even more red-hot reads than what was presented (120+ titles!!!), download the handout of presented titles, and check out the hijinx that ensued while live-tweeting the buzz at #RomanceNYPL.

OK for YA (more titles available under Books for Teens):