Hello lovely librarians! We hope you had a nice weekend and we know for some of you it's still the weekend because of Columbus Day. Here's a look at a couple key backlist titles, in the spirit of the day:

A VOYAGE LONG AND STRANGE: On the Trail of Vikings, Conquistadors, Lost Colonists, and Other Adventurers in Early America by Tony Horwitz
To recount the wild era when Europeans first roamed the New World (between Columbus's sail in 1492 and the Pilgrims' arrival in 1620), Horwitz sets out on a modern-day adventure. Along the way he retraced the steps of our early explorers by going inside an Indian sweat lodge in subarctic Canada, down the Mississippi in a canoe, taking a road trip fueled by buffalo meat, and fitting into sixty pounds of armor as a conquistador re-enactor in Florida.
1494: How a Family Feud in Medieval Spain Divided the World in Half by Stephen R. Bown
In 1494, award-winning author Stephen R. Bown tells the untold story of the explosive feud between monarchs, clergy, and explorers that split the globe between Spain and Portugal and made the world’s oceans a battleground. "This is a starry love story, a tale of seething jealousies and subterfuge, a political imbroglio, and religious cruelties. It sounds like Shakespeare and it could have very well been the plot of one of his plays.... In the 15th century, the world began to take shape in the ways we understand it today." –Toronto Star

Since we’re talking about exploration, here are some cats exploring exciting new places:

Happy Monday friends! We've got a treat for you today–it's a success story. Who doesn't love those?

By day Ronald H. Balson is a trial attorney in Chicago, but by night (or the weekend, or whenever he has time), he writes. His practice took him around the globe and seeing villages in Poland inspired his debut novel, ONCE WE WERE BROTHERS, which he self-published. With virtually no marketing or publicity, it steadily built word-of-mouth acclaim (the average Goodreads rating is 4-1/2 stars) until an eagle-eyed editor at St. Martin's Press snapped it up.

ONCE WE WERE BROTHERS is a heart-wrenching story about two boys, as close as can be without blood relation, who find themselves on opposite sides of the Holocaust as they struggle to survive in war-torn Poland. Sixty years later, their lives collide in a quest for redemption. The result is an enthralling tale of love, survival, and triumph of the human spirit, perfect for fans of SARAH'S KEY by Tatiana de Rosnay.

"This novel is uplifting and moving, intelligently written and featuring historically accurate context and an unusual insight into human character and motivations. Highly recommended for all readers." – Library Journal, starred review

"...readers will be riveted by this novel’s central question: Will justice long delayed be denied?" – Kirkus Reviews

"Many will enjoy this gripping novel for its narrative drive and its emotional storytelling." – Booklist 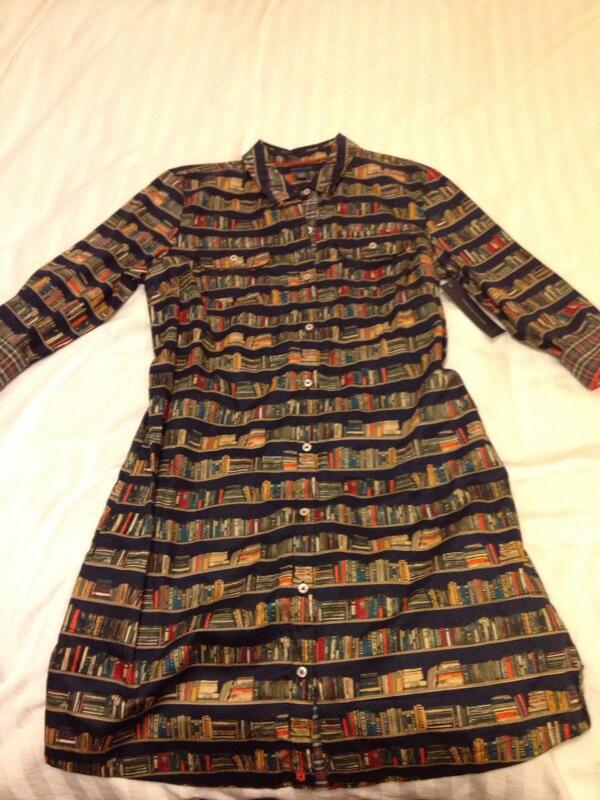 Banned Books Week (Sept. 22-28) is upon us once again librarian friends!

This is the week to read and re-read all your favorite banned and challenged books.

If you're feeling inspired to read aloud, we highly recommend that you submit a banned book reading video on the Virtual Read-Out page on YouTube. And don't forget to join the conversation on Twitter today (Monday) 9/23 from 10 am - Noon and Wednesday 9/25 from Noon - 2 pm using the hashtag #BannedBooksWeek2013.

Let's keep fighting for our FREADOM!

Good afternoon, friends! Today we have a special treat for you. We were so pumped when we saw Preservation Librarian Craig Fansler tweet a photo of the MR. PENUMBRA'S 24-HOUR BOOKSTORE exhibit at the Z. Smith Reynolds Library that we had to do more than just re-tweet it. We immediately wrote to Craig (the clear leader of the "Unofficial Robin Sloan Fan Club" at ZSR Library) and asked him our most burning questions about how this awesome display came to be:

What more is there to life, really?

Talia attended local bookstore events for Louise Penny (HOW THE LIGHT GETS IN) and Wilton Barnhardt (LOOKAWAY, LOOKAWAY) at Flyleaf Books and McIntyre's Books. All were smash hits as you can see from the standing room only pictures.

Meanwhile, Anne hit the Rockaways and found kittens living under the boardwalk. She (of course) wanted to take all seven of them home that instant! Fear not! a neighborhood kitten wrangler is keeping an eye on them.  Phew!

We hope your week is off to a good start!

Happy Monday, library buds! We're passing on some excellent reading recommendations to you and your patrons from some very wise sources.

- Publishers Weekly said that this week you should be reading SUITABLE ACCOMMODATIONS: An Autobiographical Story of Family Life: The Letters of J.F. Powers, 1942-1963 edited by Katherine A. Powers. "These vibrant letters, collected and edited by his daughter, Katherine, reveal a restless, promising writer and family man with a wry sense of humor and a hunger for literary camaraderie." See what else you should be reading this week.

- NPR recently reviewed THE BONE SEASON which they said was always difficult to do for a book with lots of the pre-pub hype. "So how is THE BONE SEASON? It's terrific—intelligent, inventive, dark, and engrossing enough to keep me up late to finish." Read more here.

- Lena Dunham wants YOU to read THE LOVE AFFAIRS OF NATHANIEL P.:

It's Sunday! Go curl up and read The Love Affairs of Nathanial P.

- And don't forget we're running two sweepstakes right now! One for our LibraryReads September selections and one for ALL OUR PRETTY SONGS. [...]

- C-SPAN 3 aired an event at the Smithsonian in which Daniel Stashower discussed his book, THE HOUR OF PERIL! You can watch the recording on C-SPAN.org. Just click the link then select "The Civil War: The Baltimore Plot Against Lincoln" in the right panel.

- Erica Jong, the author of FEAR OF FLYING who some of you will remember from the AAP's BEA Librarian Dinner, has highly recommended Fay Weldon to her Twitter followers after The New York Times ran a review of Weldon's HABITS OF THE HOUSE. Read the review on NYTimes.com.

- Also in The New York Times was a list of "twisty tales of sin and corruption set against an unforgiving Texas backdrop." The list of Southern crime fiction included THESE MORTAL REMAINS by Milton T. Burton, COMPOUND MURDER by Bill Crider, and STRONG RAIN FALLING by Jon Land (e-galley available).

- And now for the best four seconds of your day/week/life care of Alene Moroni:

Happy post-Fourth of July weekend, librarians! Rub the firework flash blindness out of those eyes, friends, and get ready for another week.

We're back and unpacked after the happy chaos of ALA Annual, but we're diving straight into a full week of Spring and Summer 2014 launch meetings, so expect some e-mail delays. We'll get to everything as quickly as we can.

You might remember that Augusten Burroughs got a puppy on book tour in May. Looks like Radar is adjusting to NYC life http://t.co/odWGcR1plT

Also be sure to wish the inimitable Chris Vaccari from Sterling a (belated) happy birthday!

- We hope you got the chance to properly celebrate National Doughnut Day last Friday. If not, it's not too late. Any day can be National Doughnut Day if you want it to be! Just get yourself some torus-shaped deep-fried dough and GO. TO. TOWN. Our recommended reading pairing: Jessica Beck's Donut Shop Mysteries.

- EarlyWord posted the full list of titles mentioned at the 4th Annual Librarian Shout 'n Share panel on their site with a nice description of the panel, so if you didn't get to BEA, those are the books your colleagues wanted to be sure you knew about.

The titles mentioned that are published and distributed by Macmillan:

FANGIRL by Rainbow Rowell
THE BONE SEASON by Samantha Shannon
FLAT WATER TUESDAY by Ron Irwin
LADIES' NIGHT by Mary Kay Andrews
HAVISHAM by Ronald Frame
THE TUDOR CONSPIRACY by C.W. Gortner
CINNAMON AND GUNPOWDER by Eli Brown
HOW THE LIGHT GETS IN by Louise Penny
GOOD AS GONE by Douglas Corleone
PERV by Jese Bering

- As a follow up note: we just found out that FLAT WATER TUESDAY is a June Indie Next Pick alongside ON SAL MAL LANE by Ru Freeman (we will have finished copies of this one in booth #2103 in Chicago!).

"Hamilton's previous McKnight books were steeped in the lonely ethos of [Michigan's Upper Peninsula], but he may be even more successful in his rendering of today's broken Detroit as we follow the tenacious McKnight past boarded-up mansions, graffitied railroad bridges and trash-strewn yards. It doesn't make a pretty picture, but LET IT BURN may be Hamilton's best novel yet."