Happy #ThrillerThursday to two series favorites, a debut, and a new novel from a writer serving a life sentence in prison (no joke!): THE NATURE OF THE BEAST by Louise Penny The outstanding 11th book in #1 New York Times bestselling author Penny’s Inspector Armand Gamache series is an August 2015 LibraryReads pick, a September […] 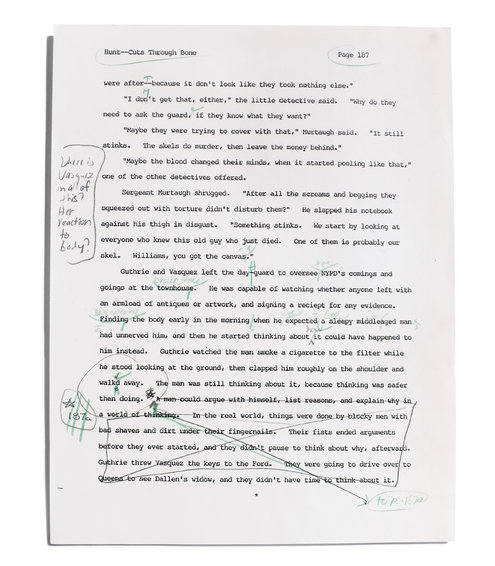 Just before Labor Day in 2011, Toni Kirkpatrick, an editor at Thomas Dunne Books, an imprint of St. Martin’s Press, picked up her phone and called an unfamiliar number with a Southern California area code. She was hoping to deliver good news to a man named Alaric Hunt, the newest winner of a debut-detective-novel writing contest, jointly sponsored by Minotaur Books (another St. Martin’s imprint) and the Private Eye Writers of America.

When a woman answered the phone, Kirkpatrick asked if she could speak to Alaric.

“He’s not available. He’s in an institution.”

The woman on the phone was Hunt’s first cousin, Jade Reed. She had mailed the manuscript to Minotaur on his behalf.

Before this phone call, it had never occurred to Kirkpatrick that her contest winner might have spent the past 25 years in prison, where he’s serving a life sentence for murder.

There's a saying that truth is stranger than fiction, and this is definitely one of those stories.

Sarah Weinman did an incredible profile of Alaric Hunt, author of CUTS THROUGH BONE, who wrote his award-winning novel while working in the prison library. Click here to read the full New York Times story.
[...]

The excellent team at St. Martin's Press has put together a great chapter sampler of their hot Spring 2013 debuts. And it's only available to librarians!

We would love to have you take a peek at the work of these new writers and give them a chance in your libraries.

**Expect approval in 24-48 hours. Be sure your professional information is included in your profile!

THE WEIGHT OF A HUMAN HEART by Ryan O'Neill
REVIVER by Seth Patrick
FOAL PLAY by Kathryn O'Sullivan
CLAWS OF THE CAT by Susan Spann
FLAT WATER TUESDAY by Ron Irwin
THE LAST LINE by Anthony Shaffer and William H. Keith
THE GOOD LUCK GIRLS OF SHIPWRECK LANE by Kelly Harms
SON OF ZEUS by Noble Smith
PAINTED HANDS by Jennifer Zobair
BLOOD ORANGE by Karen Keskinen
MURDER, SHE RODE by Holly Menino
THE CARETAKER by A .X. Ahmad
CUT THRUOGH BONE by Alaric Hunt

Let us know what you think of the new kids!