Where do soldiers belong after their homecoming?

In THANK YOU FOR YOUR SERVICE Pulitzer Prize-winning journalist David Finkel reconnects with the men of the 2-16 Infantry Battalion—the same men whose tour he shadowed during the Iraq War as chronicled in his previous book, THE GOOD SOLDIERS.

Now Finkel has followed them as they’ve returned home and struggled to reintegrate into their family lives and into American society at large.

"In a series of interconnected stories, Finkel follows a handful of soldiers and their spouses through the painful, sometimes-fatal process of reintegration into American society. The author gives a cleareyed, frightening portrayal of precisely what it is like to suffer with post-traumatic stress disorder or traumatic brain injury and what it is like to have the specter of suicide whispering into your ear every day." —Kirkus Reviews (starred review)

"Told in crisp, unsentimental prose and supplemented with excerpts from soldiers’ diaries, medical reports, e-mails, and text messages, their stories give new meaning to the costs of service—and to giving thanks." —Publishers Weekly (starred review)

"It is impossible not to be moved, outraged, and saddened by these stories, and Finkel’s deeply personal brand of narrative journalism is both heart-breaking and gut-wrenching in its unflinching honesty." —Booklist (starred review)

I assume you're all subscribed to Shelf Awareness, the insightful daily newsletter that collects all sorts of good info on day-to-day publishing happenings, but just in case you're not, allow me to swivel your neck in their direction like the literary chiropractor I am. Boom: Shelf-Awareness.com.

Shelf Awareness also has a newsletter dedicated entirely to one title that they deem "a great handselling opportunity" called Maximum Shelf (full disclosure: we sponsor the issues with our books). Today's Maximum Shelf featured a book that we're all very excited about: CLOSE MY EYES by Sophie McKenzie.

EarlyWord Galley Chatters may remember that this is the title that Robin Beerbower of Salem Public raved about across the entire cover of the galley!! 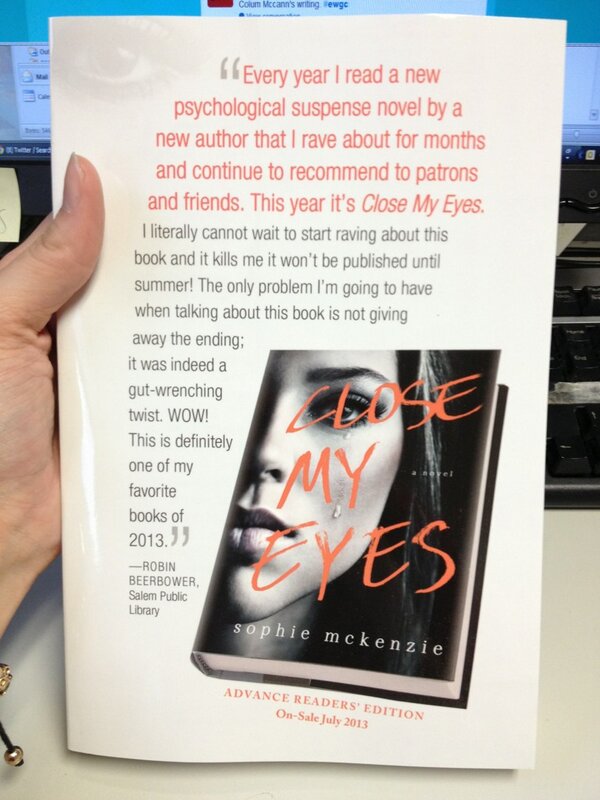 "[CLOSE MY EYES is] a fast-moving tale of psychological suspense full of twists and genuine surprises. While comparisons have been made to Gillian Flynn's GONE GIRL, McKenzie's page-turner is more reminiscent of the creepy Gaslight, the 1944 film that so powerfully depicted a terrorized woman it led to the term 'gaslighting,' a form of mental abuse wherein the victim is made to believe she is going insane..."

They've also included a great interview with author Sophie McKenzie about how she went about writing her first novel for adults.

Head on over to Shelf-Awareness.com now to learn more about CLOSE MY EYES!

We were so excited that Jennifer Lawrence won the Golden Globe Award for Best Actress (musical or comedy) for her role in Silver Linings Playbook, based on Matthew Quick's wonderful debut novel, THE SILVER LININGS PLAYBOOK! (And P.S. best nomination recap ever, right?)